We continued to Iran, undoubtedly the trip highlight

In October and November 2013, Eric and Debora filled a gap in our travel bibliography: Persia and Arabia.  We visited six new countries: in order, the United Arab Emirates; the Islamic Republic of Iran; Kuwait; the Sultanate of Oman; Yemen and its island of Socotra; and the Kingdom of Saudi Arabia.  It was an eye-opening and fascinating journey. 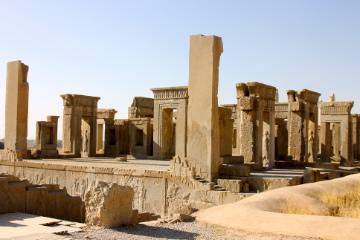 A free flight to Abu Dhabi on blue-chip Etihad Airways began the trip, featuring private suites (thank you Citibank MasterCard!).  From there we continued to Iran, undoubtedly the trip highlight.  Not a Hawaiian vacation: the visa approval process alone takes two months. The U.S. has no diplomatic relations with Iran.

Everyone said "Isn't it unsafe?" or "Why do you want to go there? They hate us and want to kill us." That's certainly what we all read in the press.  The reality couldn't be more different.

When ordinary people on the streets, or in restaurants, found out we were Americans, we became rock-stars. They broke into smiles and shook our hands, posing for pictures, "Thank you for coming!", "God Bless you". From an old guy on the street in Shiraz, a bear-hug and a kiss on both cheeks.  Everyone has a brother, uncle, cousin, etc. in Los Angeles.

We visited the fabled ruins of Persepolis, capital city of Cyrus and Darius the Great.

Here, a passerby (third from Left) greeted Debora and learned we were Americans. She immediately summoned her clan for a picture: 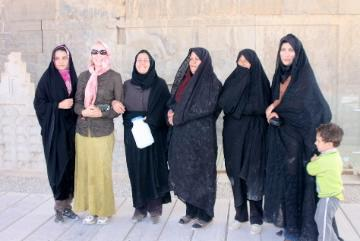 Of course the regime is anti-American, hurting from sanctions, and we're the longtime "Great Satan." But those signs are disappearing. We saw just two anti-American posters in Tehran, one of them half-ripped. Many people wanted to buy us tea or dark coffee (no alcohol in Iran, sadly) and talk politics. Whoa! At a restaurant in Shiraz, cradle of Persian civilization and home of Shiraz wine, Shirazi salad, and iconic poets Hafez and Saadi, a young couple (he an anesthesiologist and she a pediatrician) began bashing the regime.  He exclaimed in English, "I hope when you return, the clerics will be gone, and we can be drinking Shiraz wine!"

In Isfahan, Iran's most famous city, we were touring the fabled Shah Mosque with its turquoise-tiled bulbous domes and minarets. A pair of young robed and turbaned clerics were greeting people and handing out candy.  What the heck, I asked for a picture. The one replied with a wisecrack in perfect American English, though he'd never been out of the country. There ensued an hour's discussion about life in Iran, what it's like to be a young cleric (he said it's a job), Islam and Christianity, etc.

Iran is a land of great travel wonders. Tehran, although smoggy and a traffic-choked metropolis, is home to the ousted Shah's astonishing Crown Jewels and Peacock Throne. His former palaces were a walk down 1960's memory lane. Darband, nestled in the foothills of the snowcapped Elburz Mountains, is a delightful place to hike the trails and have a glass of tea or dinner by the creek.  At the old Golestan Palace, we became royalty: 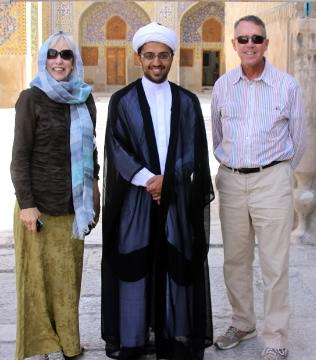 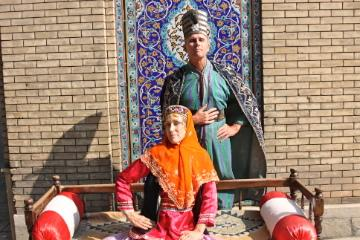